The wireless broadband access systems wide spread has caused a number of problems that impede the efficient operation of the existing systems and the scaling of the wireless networks. Within this article two main problems will be reviewed:

The antenna's radiation pattern without beamforming technology support is fixed and cannot be changed during data transfer. An example of a base station sector with three subscriber devices is shown in video 1.

This approach has several disadvantages:

Video 2 shows the operation of the base station sector with three subscribers, under local interference conditions. At time intervals allocated for uplink data transmission, the sector receives the sum of the subscriber signal and interference. In case of a high interference level, the sector cannot separate the useful subscriber component from the sum of received signals and the data transmission must be repeated. It will take extra time, i.e. system resources will be used inefficiently. Note that the interference signal in the sector coverage area affects the operation of all subscribers, since the wide radiation pattern main lobe does not allow selective spatial suppression. In other words, any signal into the main lobe of the sector radiation pattern will influence the entire system operation.

Video 2 - A local interference influence on a sector without beamforming technology.

The outlined problems can be solved by using antennas that support the beamforming technology.

An example with three subscribers connected to the same sector with beamforming technology is shown in video 3. Compared to a conventional antenna, the antenna's radiation pattern has become narrower and the main lobe is oriented towards the subscriber unit.

Video 3 - An example of sector with beamforming

The advantages of using devices with the beamforming technology support: 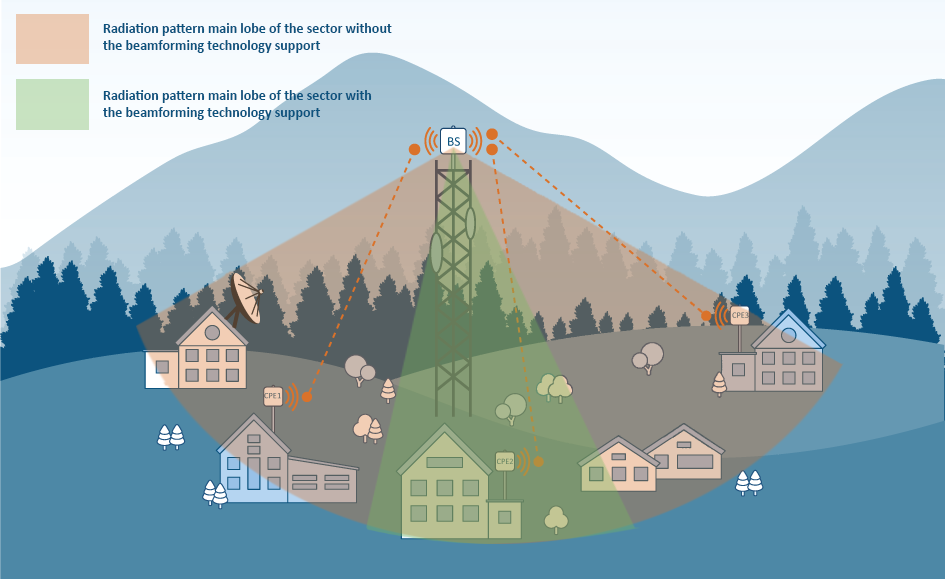 Modern devices have several emitters. One of the structures used in modern radio communications is the phased antenna array (see Figure 2), which is a matrix of conducting elements. Their shape and relative position determine the frequency range and directional properties of the antenna.

A copy of the modulated signal from the radio module is supplied to each antenna element. In addition to the antenna array design, the radiation pattern is determined by the signal's characteristics from each of the radiating elements: by default, the signals are in-phase, but by intentionally introducing a phase delay, the shape and direction of the main lobe can be changed. 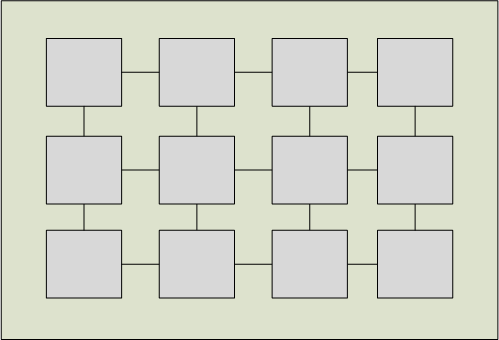 Figure 2 - An example of a phased array antenna layout

The effect described above is used in devices with beamforming technology. The approach on how the radiation pattern control is performed, divides such devices into two large groups:

Implementation in the InfiNet devices

R5000-Qmxb and E5-BSQ devices integrated antennas includes 15 built-in templates of the radiation pattern with a main lobe width of 20º (gain 21 dBi) located with an offset of 5º from each other and one template with a lobe width of 90º (gain 15 dBi). Depending on the chosen template, the device can operate in two modes:

Video 5 demonstrates the establishing of correspondence between the subscriber station and the radiation pattern template. The base station sector broadcasts requests addressed to all subscribers, using every narrow directional templates in turn. The request contains information about the template number. The subscriber estimates the level of each received signal,  selects the maximum and sends the template number to the sector. After receiving information from the subscriber, the sector fills in the correspondence table and uses a template from the generated table , to interact with a specific client device. During operation the sector initiates the update of the correspondence table, adapting to possible changes in the external environment.

The migration to a system with beamforming technology support is not laborious - it is enough to perform the base station sector replacement, the configuration of the previous device is compatible with new sector, the beamforming technology does not need any additional settings and is performed transparently for users and network administrators. There is no need to replace subscriber devices - the devices are compatible with each other. However, there are two limitations to deal with:

The above described beamforming technology advantages can be used in mobile wireless communication systems. The mobility of the subscriber or of the base station has a strong influence on the link parameters, which can be neutralized by using devices with beamforming technology. The radiation pattern of such devices will adapt to changes in the external environment, trying to keep the link radio parameters at the maximum level.

Note that the implementation of such projects is a complex task that requires an unconventional approach and ingenuity. A possible solution is to use devices with beamforming technology on the client side, or both on the subscriber side and on the base station side.