Description and working principles of InfiMONITOR

InfiMONITOR consists of the folllowing features:

InfiMONITOR is intended only for the wireless devices by the InfiNet Wireless. Other vendor units are not supported.

Primary subsystem of InfiMONITOR - polling is responsible for sending requests to the devices and receiving replies with their parameters values.
The subsystem is always-on. All polling requests to all devices are distributed in time within 5 minutes in order to prevent peak traffic load to the wireless network:

Determining the link between devices

After the polling is complete, the monitoring system analyzes data received from the devices in order to determine the link presence between them.

Each device provides information about the neighbor device MAC address. The monitoring system checks the presence of a device with the obtained MAC address among the added devices and, if such a device is found, makes a conclusion that the link was established between these two devices. Thus, the devices lists of neighbors, connected by a link, will contain entries with each other's MAC addresses. 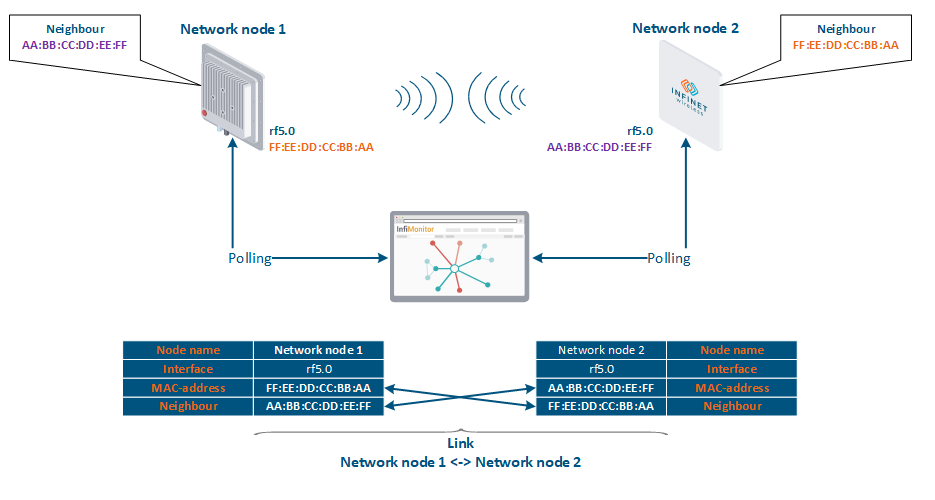 The device parameters values can also be received via "SNMP Trap" notification mechanism. As a rule, with this tool InfiMONITOR get notified by the unit about the change of the parameters, important for device and/or for wireless communication channel performance, for example, data transmission rate change, unit's reboot, connection loss between the devices, etc.
While the polling subsystem takes an active role, performing requests to the devices, the "SNMP Trap" processing subsystem acts passively. It constantly waits to receive traps from the wireless devices. Upon the reception of the trap, the subsystem immediately starts trap message processing thus allows to timely react to changes, without waiting of the polling cycle completion.

The subsystem task - to generate event in accordance with the rules created by the InfiMONITOR administrator.

The subsystem implements automatic search and devices addition. After the manual addition of a device the detection subsystem performs the following functions:

Important feature of the detection subsystem is to search only within one MINT segment. In case,  there are multiple MINT segments in a wireless network, it is necessary to add at least one device from each segment in order to enable automatic detection.

The recommended minimum screen resolution is 1600×900.

The subsystem provides storage and data preparation to ensure fast access to all inforamtion for the InfiMONITOR operators via web interface.