Ltest utility allows precise test of a radio link. It is recommended for antenna alignment when installing a new device or for testing of existing radio link.

Ltest can work in standard, alignment and bandwidth modes.

When «ltest» command starts it will show you output information that contains testing results. You can see Ltest output below: 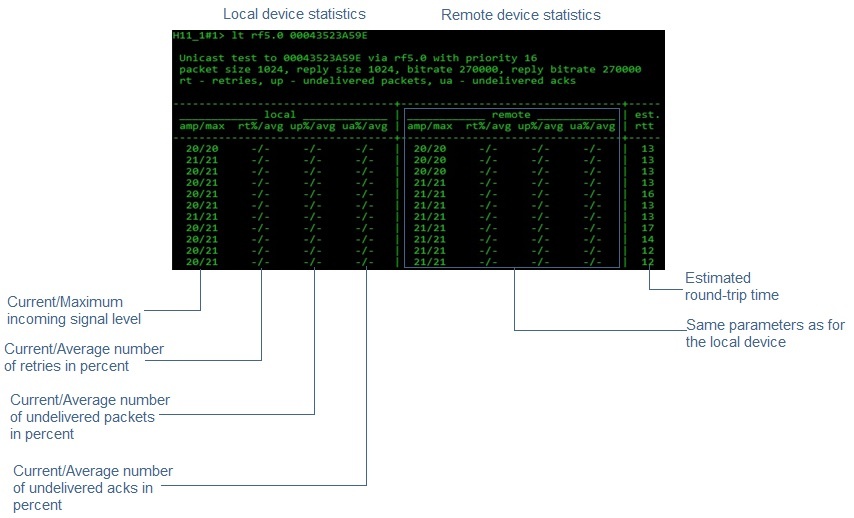 For success radio link establishing the following factors have to be considered:

ALL described parameters must be observed in the both ("Local" and "Remote") sections of the «ltest» command output.

Alignment mode (for Xm-series only)

The difference of this mode from the standard one is that «ant.amps» column is used instead of «amp/max». «Ant.amps» column indicates signal levels for each of two antennas of a devce divided by “:” correspondingly.

Bandwidth meter is used to test the following radio link characteristics: throughput in kilobits per second, packets per second, number of retries and errors.

Use the following «ltest» command options for testing:

The "muffer" module makes it possible to rapidly test the electromagnetic environment, visually estimate the efficiency of the utilization of the air links, reveal sources of interference, and estimate their power.

Several operating regimes of the "muffer" module provide for different levels of details in test results.

This regime is enabled by the "review" option. It makes possible to have a general estimation of emissions and interference within specified frequency range.

Normal operation of the radio is not possible in this mode.

This regime can be useful on the first steps of link configuration. One can observe the activity on the selected list of frequencies and make decisions of what frequencies can be used for the link so that the link did not interfere with other sources of signals.

The scan is performed only for the packets corresponding with the standard of the radio module (802.11a for 5GHz devices and 802.11b for 2.4 GHz devices. Other sources of signals on the scanned frequencies stay unseen. 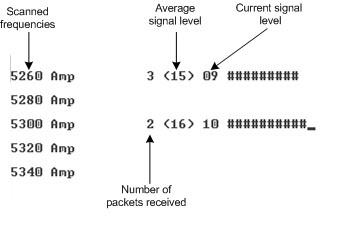 To run the "review" mode please type the following command:

Once the link is established you can use this mode to review the activity on the configured for frequency for the link. If no activity is observed that means that the signal from the remote side is being broken by the interference sources or by the obstacles on the signal propagation path.

This regime performs MAC-addresses analysis to estimate the number of clients with different MAC addresses and the efficiency of their utilization of the air link. The analysis is carried out for all MAC addresses at the frequency previously specified by "rfconfig" command. The "mac2" regime checks both data packets and the link-level ACK messages sent by protocol supported devices.

Normal operation of the radio is not possible in this mode.

Like in review mode this regime provides with the information about a current activity but on the configured frequency.

To run the "review" mode please type the following command:

The statistics gathering is used for estimating link load intensity and per client. The amount of packets sent and received, and the number of retransmissions is shown for each MAC address participating in the data exchange. 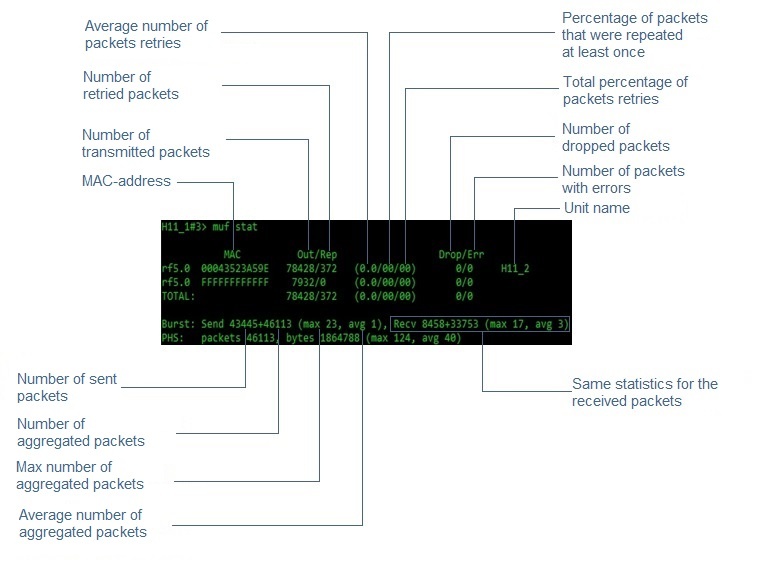 The following decisions can be made by analyzing the outputted parameters:

The “muffer stat” command shows the statistics only from registered devices.

To reset all counters please type:

The "muffer" also has the following modes:

Load meter is a powerful tool that allows estimating the load of a system interface specified by interface parameter. By default, the information is displayed on one line and updated every second; the load is measured in kilobytes.

Below picture shows the load meter output for the radio interface outputted in line-by-line mode with one second interval. 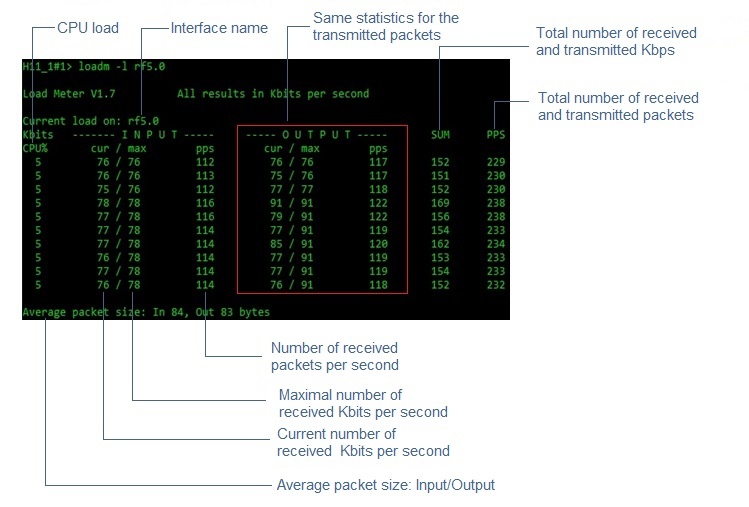 To run load meter like it is shown above, please type:

Below picture shows the example of interfaces statistics output.