The Switch configuration is based on a set of rules for the switching groups:

The MINT network can be viewed as one virtual distributed layer-3 switch, where border nodes act as external ports of the virtual switch. The virtual switch task is to transport frames from one external port to another. It is important to understand that switching groups should be created only on the nodes where frames enter from or leave to the "outside" network ("outside" relative to MINT). On the repeater nodes (in mesh topology) there is no need to create switching groups. 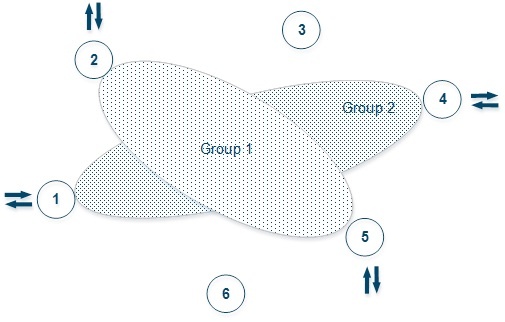 In order to put an incoming frame into one of the switching groups, a set of flexible rules is used, which allow sorting frames according to various criteria, like:

Trunk group is a switching group in the "Trunk" mode.

The trunk groups are used for the ease of configuration, when VLAN flows are transmitted to several subscribers.

If you enable the trunk group at the BS side to transmit several VLAN-flows to several directions, then at the CPE side, you should use the "In-Trunk" option to specify the group number of the trunk group that includes the required switching group.

Trunk groups may also be used to solve the task of connecting several VLAN segments. 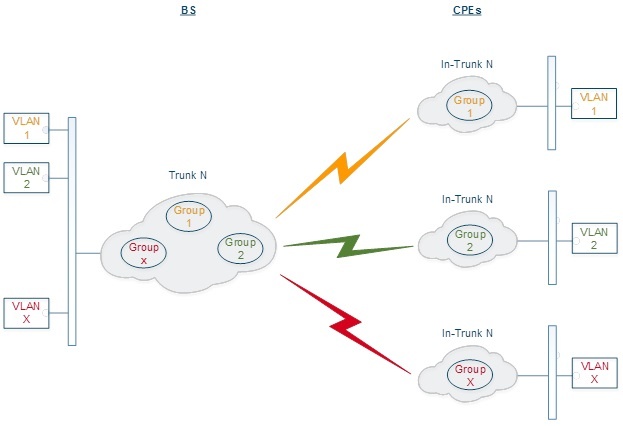 Management connection to the unit

For the management purposes, you can create a dedicated Switch Group for all units in the MINT network, attached to the Switch Virtual Interface (SVI). Assign the IP addresses directly on the SVI interface for native management. All packets sent via SVI interface will be distributed only within the assigned switch group.

The universal way to configure Management VLAN via dedicated switch group is presented in the figure below (for more information see section "Remote management of the R5000 units").

You have to assign the Management IP addresses to "sviM" interface which is the management interface of Group M and includes "vlanX" (with parent interface "eth0") and "rf5.0" interface: 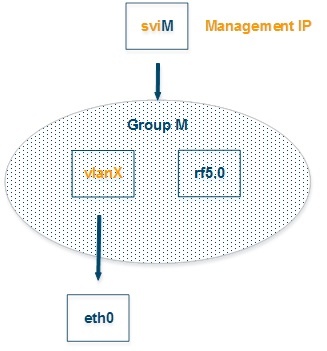 Frames originated by MINT network nodes (for example: containing RIP/OSPF, ping packets, etc) do not belong to any of the switching groups. Therefore, they cannot leave MINT network via switching through any of the external ports.

Rules are used for the following purposes:

A packet that cannot be associated with any switching group will not switched by the device. If there is no group with appropriate rules for the packet, it is discarded.

The rules consist of a "rules list" and a decision (deny/permit). While parsing the list, the switch checks whether a packet matches the rule. If it matches the rule, the decision set for this rule is applied to the packet. Otherwise, the list of rules is viewed further. Rules are taken one at a time. If a packet does not match to any rule, the default decision for this group or interface is taken.

which is synonym to:

There are three different kinds of qualifier:

Primitives may be combined using:

General options in this section:

Disabling the switch in the absence of routing settings can lead to termination of packet transmitting through the device.

You can change the list order of the switch group using the "up/down" arrows.

In all three types of filters: Switching, IP Firewall and Traffic Shaping, there is the same syntax called “PCAP expression” for setting a rule. It is a universal tool for creating filters.

In this section you can set the IGMP-parameters for the groups for which support of IGMP snooping is enabled (the IGMP check box is marked for these groups in the "MAC Switch" section). 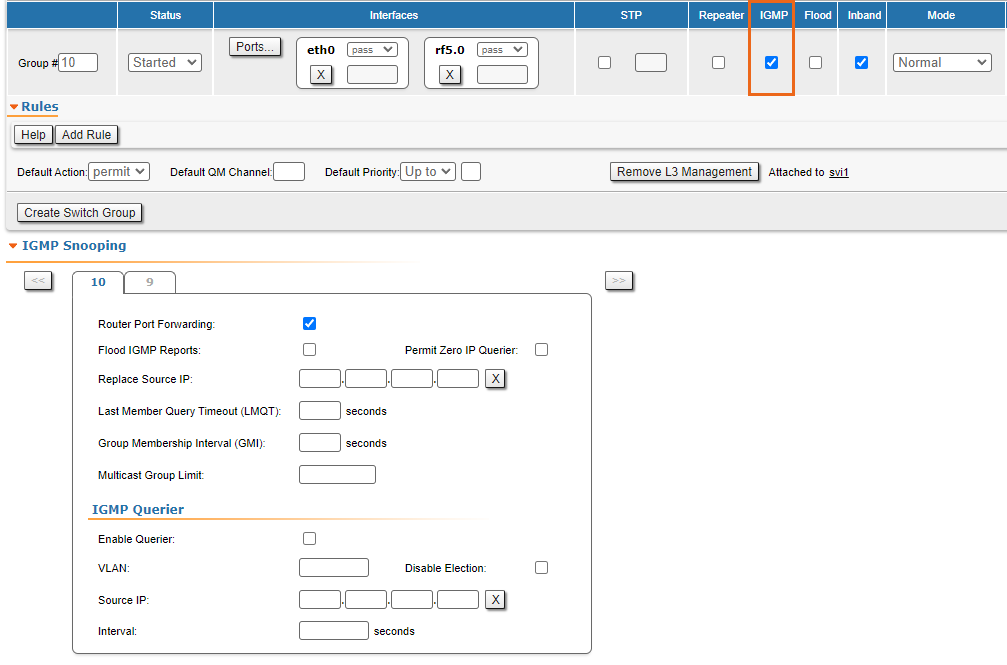 IGMP Snooping is a multicast constraining mechanism that runs on Layer 2 devices to manage and control multicast groups. By listening to and analyzing IGMP messages, the device running IGMP Snooping establishes mappings between ports and multicast MAC addresses and forwards multicast data based on these mappings.

IGMP Snooping parameters can be set within "MAC Switch" section: