Complex wireless network topologies require enhanced mechanisms to ensure fast packet transfer constantly adapting to the status of the radio connections, especially in cases with mobile objects. The radio link quality changes may lead to different transmission rates from couple of Mbps to hundreds of Mbps for the same link in different conditions. Thus, InfiNet’s proprietary MINT protocols offer an alternative routing method, by taking into account the network topology changes in real time and evaluating the quality of the radio links in real time. In addition to the routing capabilities, MINT includes a set of features that were designed for ensuring an efficient functionality of the InfiNet Wireless units.
This document describes main features of the MINT protocol to ensure deep understanding and, as a result, correct and effective configuration of the MINT network.

Initially, the InfiNet Wireless units were developed with IP routing capabilities only, but to solve a number of tasks it was necessary to develop a new solution. Those tasks were:

In order to solve these tasks and to ensure a fast and optimized packet transfer between wireless units InfiNet Wireless developed a proprietary technology called MINT.

The MINT protocol includes radio and networking functionalities, on the diagram below we can see the MINT location among the InfiNet units functionalities and specify following features: 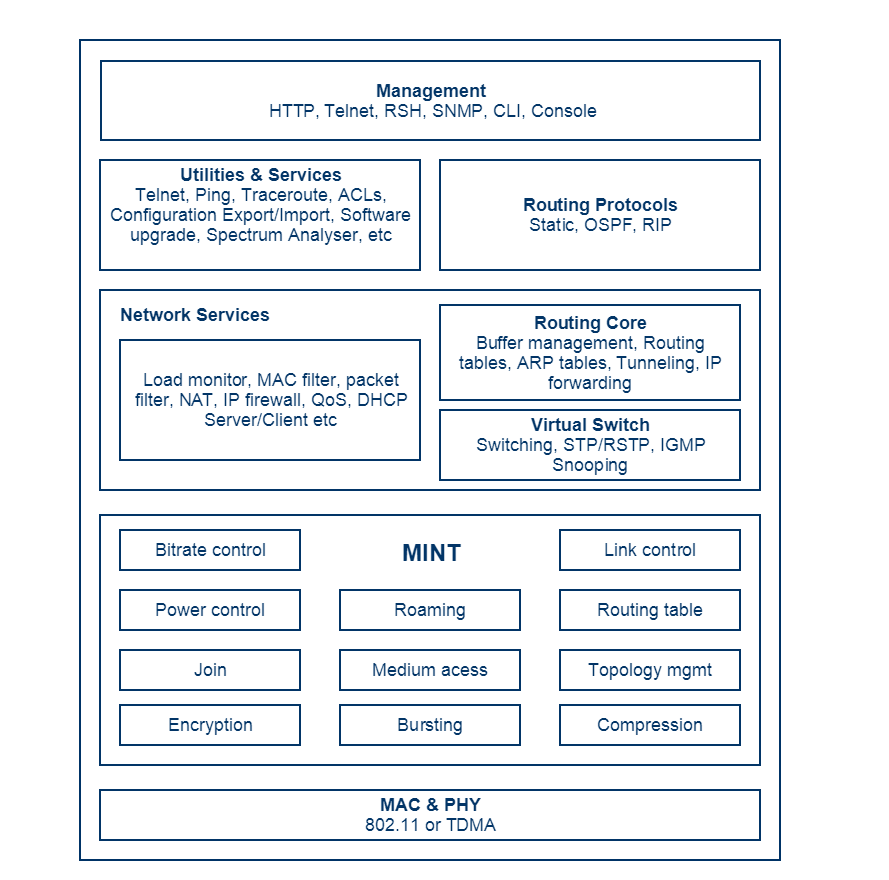 Figure 1 - The MINT location among the InfiNet units functionalities

MINT operates between L2 and L3 of the OSI reference model. It routes the frames to the destination hop-by- hop and knows the network topology like a classical L3 routing protocol, but the routing is based on the destination MAC address. MINT routing is an alternative to classical L3 routing protocols, being designed especially for wireless networks, where the radio link quality is changing all the time and needs to be taken into account. The routing module does not need to be enabled for ensuring the data transfer through the MINT network. It relies only on the switching module, which is by default activated.

The MINT network can be viewed by the external Ethernet network like one or several virtual Ethernet switches, each having many ports and switching packets from one port to another. However, the mechanisms inside MINT that ensure this behavior are more complex. Next chapter detaily describes main process of the MINT system.

MINT areas are bordered by the MINT interfaces of the InfiNet Wireless units in a network.

Two or many networks can be joined via the virtual pseudo-radio interfaces. Thus, it allows to connect the radio and Ethernet physical interfaces, and concatenate two MINT areas into a single MINT area. This way the traffic reservation and redistribution can be performed.

The frame processing for incoming Ethernet frames can be summarized as follows:

The routing capabilities of MINT are similar to any L3 routing protocol capabilities: it collects data about the network topology, it has a MINT map containing all the neighbors and the routing table, checks periodically the link status and updates the routing table. The frames are routed hop-by-hop, based on the destination MAC address (the concept is similar to L3 hop-by-hop routing based on the destination IP address).

Each MINT node takes its own decision about how to reach the destination. MINT selects always the fastest path and re-selects a new path for the next data frame in case of any path characteristics change. The network path characteristics are described by the MINT cost parameter.

The MINT cost is especially designed to take into consideration the fluctuating radio conditions. Unlike to the OSPF cost which takes into account only a fixed bandwidth and the availability of the link, MINT will evaluate in real time the radio conditions of every link in order to accurately reflect through the cost value what is the quality of the link. The MINT cost is a function with the following parameters:

The routing table contains all the paths towards all MINT nodes and it is structured following way:

The time interval for the MINT cost exchanging with the neighboring nodes is adjusted accordingly to the MINT node role. For instance, in case of mobility scenarios, it is necessary to reduce the exchange time interval as the radio conditions change all the time while moving. This improves the reliability, but reduces also the bandwidth available for user data transfer, due to higher service trafic amount.

MINT is a proprietary protocol, therefore the data transiting a MINT network needs to be mapped between MINT and Ethernet or any other protocols in order to properly send the information outside the MINT network.

A Switch Group is a special container that filters data according to specific rules and acts like the transition point between MINT and Ethernet, an ingress/egress point between Ethernet and MINT. Traffic can be switched only between at least two Ingress/Egress points. Although the main purpose of a Switch Group is to be a container for transporting VLANs, it is possible to use them to transport also other types of traffic using additional filters.

For two units to switch data between them they need to have the same switch group number configured. Also, a switch group is a broadcast domain. Before entering the MINT network, the packets are assigned to a specific switch group, that will not be changed by any other MINT node. Only packets arriving from the external network are filtered based on the rules in the switch groups. 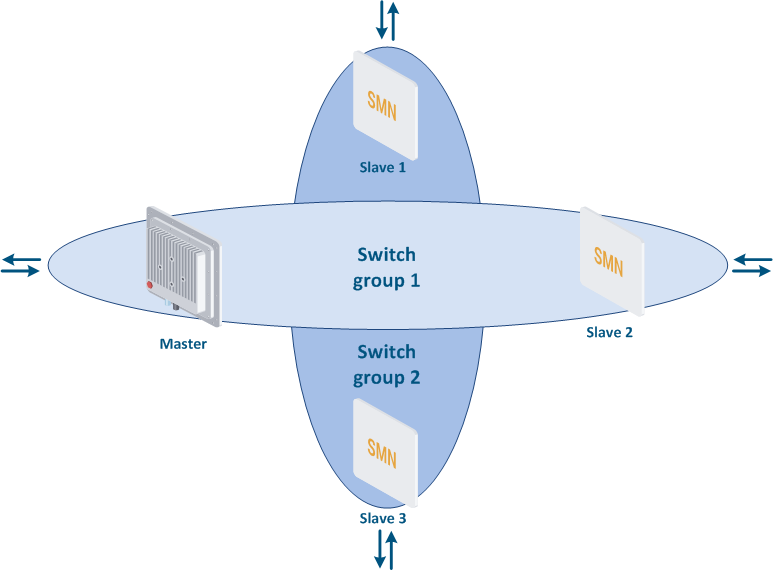 Traffic can be differentiated according to the following criteria:

The Switch Groups have at least one logical interface that can be used as a management interface and two or more interfaces for data traffic. One InfiNet Wireless unit can have several Switch Groups (from 1 to 4095) - for example, different logical channels can be created for different traffic types.

The interfaces assigned to a Switch Group can be:

A switch group can include several interfaces and can switch frames between different interfaces depending on the network configuration.

The overall behavior of a switch group is similar to a virtual Ethernet switch as stated before, but the inside mechanism for the frame transfer is more complex: for each unit, the switching module is responsible for switching between the external ports and the MINT interfaces, but once the frames are in the MINT network, they will be encapsulated by the MINT header and routed from the source MINT node to the destination MINT node.

The broadcast frames originating from the external network (ARP, for example) are MINT encapsulated and sent only once to every MINT node that are part of the switch group that initially filtered the broadcast frame.
Every unit learns which other units have the same switch group configured through the “Switch Group Discovery Protocol” and this can be checked using “mint map swg” as below.

The copy of the external broadcast is sent using a proprietary multicast protocol, that distributes the copy once for each member of the same switch group.

The MINT nodes that receive the copy of the broadcast will switch it to the external network if the Ethernet port is included in the switch group, otherwise will drop it.
The broadcast and multicast generated internally by MINT are sent to every node, but the receiving node will not duplicate the frame in order to avoid creating broadcast storms or loops. The internal broadcast and multicast will never be switched to the external network, no matter what are the interfaces included in the switch group, the processing takes place only locally.

The unicast frame transmission is based on the following steps:

The traffic is first filtered and switched towards the MINT interfaces on the border between the external network and the MINT network. Afterwards, the MINT routing and encapsulation take place.

MINT avoids internall loops by the nature of its operation:

Even if MINT will not create loops inside the MINT network, the external network can still cause loops if the switch group configuration is not taken into account.
The picture below illustrates a typical scenario that can cause loops. Several units are connected to the same switch as part of an Ethernet segment. The PRF over Ethernet interfaces are used to unify the MINT area in order to offer alternative paths (redundancy) between the MINT nodes.

If the Ethernet interface is included in the switch group for all the units connected to the switches, loops will be created as shown at the figure above:

However, if the Ethernet interface is not included in the switch group on Unit 2 for example, the behavior changes:

In order to avoid loops caused by the external network, one of the following methods can be applied:

MINT protocol enables sending and execution of any CLI command from the local unit to the remote unit in the MINT network, even if control over the remote unit was lost.

By design, the MINT protocol deals with sending data frames via multiple network paths and this capability allows the implementation of redundancy configurations using multiple parallel connections between one endpoint and another.