Let's look at the ODR's protocol operation based on the example in (Figure 1). The network scheme consists of a base station BS1 and three subscriber devices CPE2, CPE3 and CPE4, connected to BS1. A local network segment with its own IP addressing is present behind each wireless device. An IP subnet is also assigned to the MINT area. 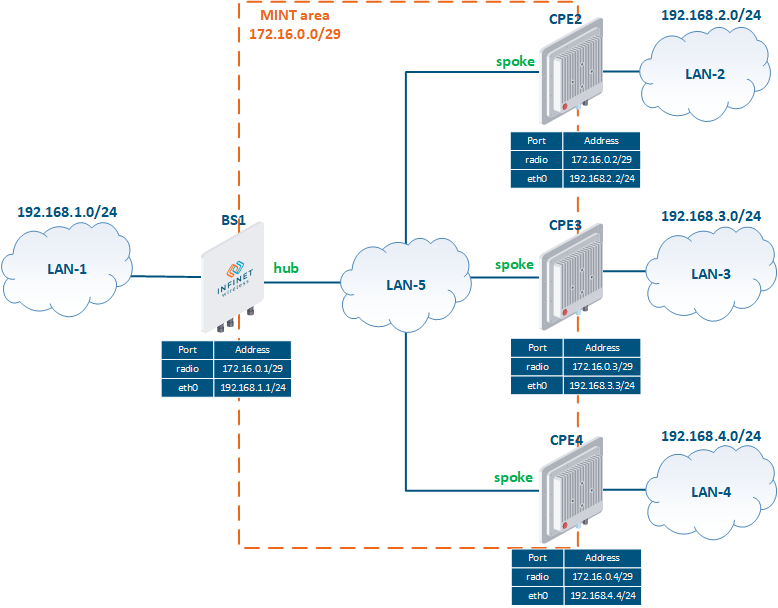 Usually, the ODR protocol is used in PTMP schemes (Figure 1), however, for a better understanding, let's complicate the scheme by implementing the load balancing and fault tolerance functions (Figure 2):

Please note that the role is not a device characteristic, but a state of an interface that supports the MINT protocol's operation. For example, a wireless device can be a hub in the MINT area to which it is connected via the rf5.0 interface, and it can be a spoke in the MINT area connected via the prf0 interface. In the example below, one common MINT area is used, therefore, for the BS1 and BS2 devices, it is enough to activate the ODR protocol support on one of the interfaces that support MINT.

After the preliminary configuration and the role distribution, CPE11, CPE12, CPE21 and CPE22 will add a default route to the routing table, specifying InfiMUX1 or InfiMUX2 as the gateway. The gateway will be selected by the lowest metric value. Each hub device will receive routing information about the end-user networks LAN-11, LAN-12, LAN-21, and LAN-22 from the devices having spoke roles. Devices BS1 and BS2 are intermediate in this scheme and do not transmit routing information to the devices with the hub role.

Fault tolerance: let's say that the whole traffic passing through BS1 also passes through InfiMUX1, and BS2's traffic - through InfiMUX2. If InfiMUX1 fails, then the BS1, CPE11 and CPE12 devices will delete the entry having the InfiMUX1 as gateway from the routing table and will add another default route via InfiMUX2. A similar situation will occur in case of failure of the InfiMUX 2.

Load balancing: the default route metric in ODR is calculated based on the radio parameters and on the channel's load level. This allows to balance the traffic for the spoke devices and evenly make use of the devices and of the communication channels in the MINT area.

Unlike static routing, the ODR protocol has the following features: