OSPF (Open Shortest Path First) - a dynamic routing protocol based on an algorithm that constructs a shortest path tree. The OSPF protocol has the following features:

The number of autonomous system routers that use OSPF to exchange routing information can be large. This leads to a high load of the communication channels because of the large number of OSPF service messages. To reduce the amount of the transmitted service information, the OSPF protocol divides the autonomous system into areas.

Each area has a 32-bit identifier, which is usually written in two formats:

It is not necessary to use sequential identifiers for the areas. For example, the network can include areas with the identifiers 0, 2 and 7 (Figure 1a).

An interface belongs to an area, not the device itself. Thus, one router can be connected to multiple areas through its interfaces (Figure 1a). 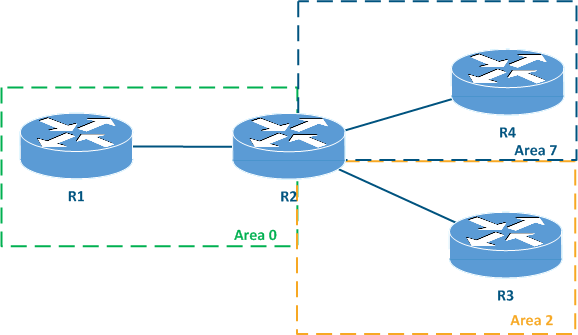 Depending on the router's place in the network, the following types of devices are distinguished (Figure 2): 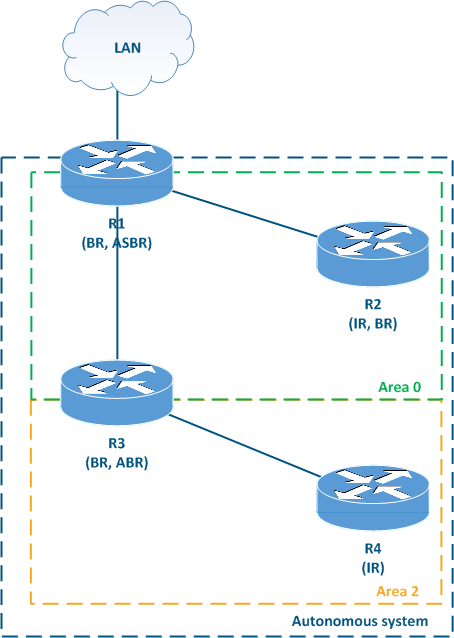 The OSPF process follows the below steps. Some steps will require a detailed explanation which is provided in the sections below.

Two actions are performed when the OSPF service is launched: the selection of the router identifier  and the definition of a list of interfaces that will participate in OSPF.

During the automatic router ID selection, the InfiNet device generates a special address from the 224. *. *. * multicast subnet, associated with the router's serial number. This helps to avoid the necessity of redefining the router ID when the IP address or the network interface are removed.

The set of interfaces that will take part into the OSPF protocol is determined based on the following rules:

If OSPF has not been started on a network interface, this does not mean that the network associated with this interface will not be advertised to the other routers. Launching OSPF on an interface only impacts the discovery of the neighbors.

Let's take a look at some examples of how to start the OSPF service on router R1 (Figure 3). The table below contains the configuration commands and their correspondence with the router's interfaces; if a match is found, a neighbor discovery process will be performed on the interface.

After the router has determined the list of interfaces where OSPF is running, it starts looking for neighbors connected to these interfaces. Besides that, all the networks assigned to these interfaces will be advertised to the other routers. This behavior can be exploited by an attacker: the router will establish neighboring relations with the attacker's device and will transmit all the routing information about the network.

This type of attack can be prevented by using passive interfaces. Any interface participating in OSPF can be configured as passive. In this case, the search for neighbors via such an interface will not be performed, however, the network assigned to this interface will be advertised to the other routers.

The list of networks that are assigned to the interfaces is defined when OSPF starts. in addition, OSPF can advertise routes towards other networks, that were added to the device's routing table. The announcement of such routes is called redistribution. These routes are external to OSPF.

The routing sources for redistribution can be other dynamic routing protocols, static entries or directly connected networks not added to OSPF. 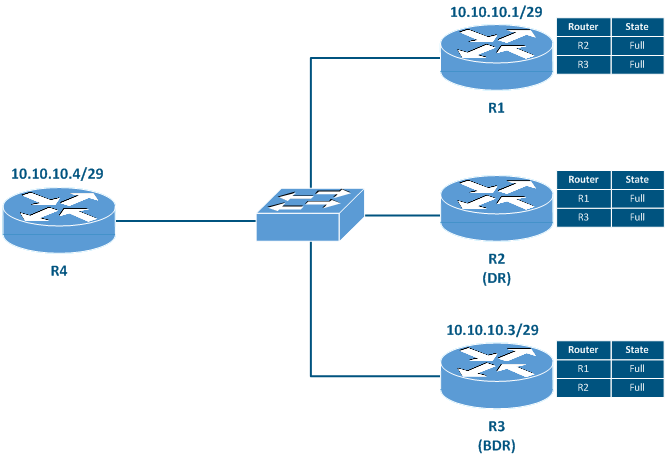 Figure 4a - The R4 router was added to the network scheme 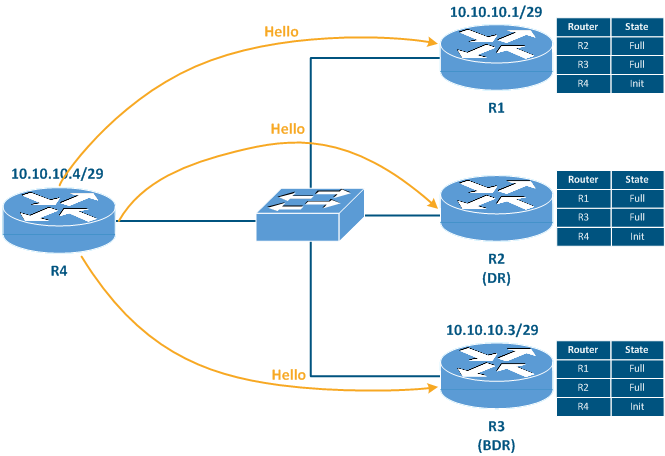 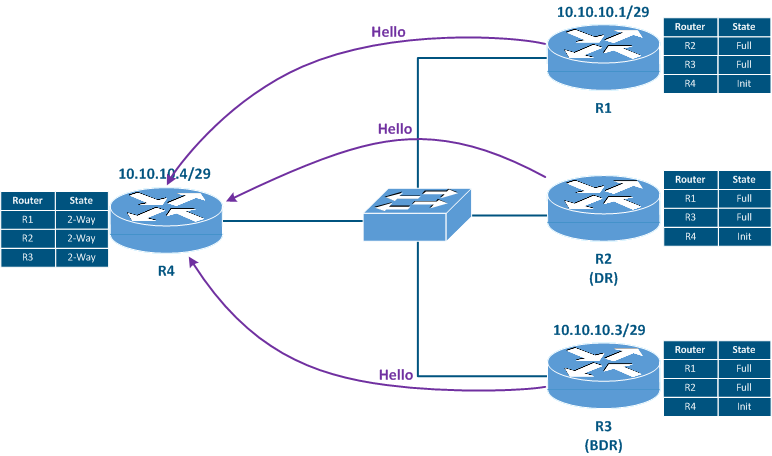 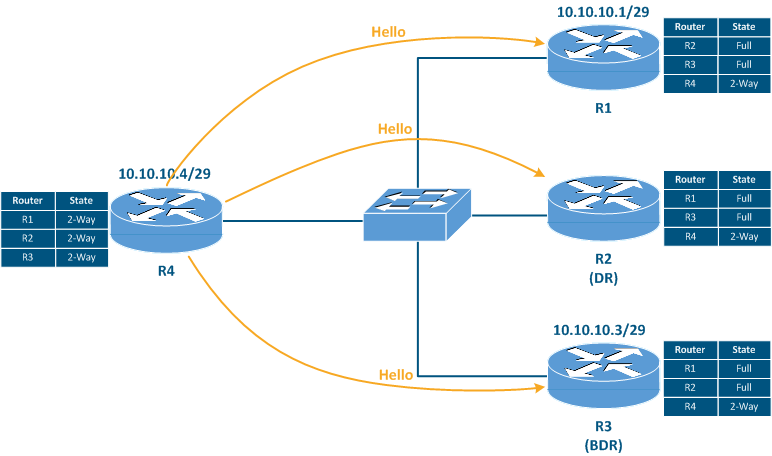 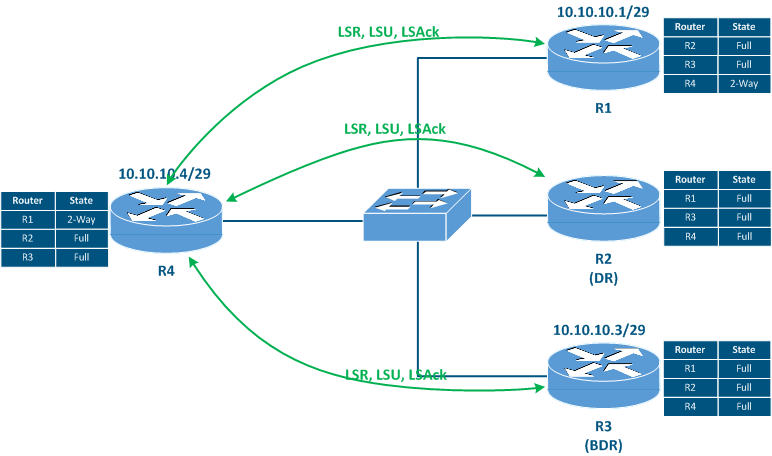 In each broadcast segment where OSPF is running, DR and BDR elections are performed. The elections are carried out according to the following criteria:

The group address 224.0.0.6 is associated with the DR and the BDR devices, which is used for LSDB synchronization. The devices having DR and BDR roles establish a Full relation with each router in the broadcast segment and require higher device performance demands compared to the DROthers. Since the device's hardware performance can become a bottleneck, it should be taken into account during network planning. Interface prioritization should be set in order to ensure a predictable selection of the highest performing devices as DR and BDR.

The main function of the DR is the routing information exchange in the broadcast segment. The main function of the BDR is to monitor the DR's state and, if it fails, to change the role to DR. Since each DROther establishes a Full relation with both the DR and the BDR, the LSDB on the BDR is synchronous with the DR, so the BDR can start performing the DR's functions without database synchronization timing delays. If the BDR becomes DR, then the BDR is selected among the DROthers according to the algorithm described above.

The routing information in OSPF is categorized in different types of LSAs. The LSDB is a set of LSAs. The LSA is not an OSPF service message, therefore, the DBD, LSR, LSU and LSAck messages are used to transmit it according to steps 6-8 used in the neighboring relations establishment algorithm.

OSPF version 2 which is supported by the WANFleX OS defines 7 LSA types as described in the table below. To explain the purpose of different LSA types, the network scheme in Figure 5a will be used: the network consists of 6 routers and three OSPF areas are defined. This scheme describes the LSA types generated by the devices regardless of the neighboring relations establishment stages.

Figure 5a - Network scheme used for analyzing the LSA types

Figure 5b - Distribution of the LSA type 1

In the networks having redundancy implemented, the LSDB contains announcements 1about the same network received from different sources. Such routes are transmitted to the RIB in the following order:

The way to reduce the OSPF service traffic volume is to use different types of areas. The OSPF protocol provides the following types of areas:

Let's look at the main features of different area types using the example in (Figure 6): routers R1, R2, R3 and R4 are connected in chain with each other, forming three OSPF areas. Routers R3 and R4 have external links. In each example, we will change the type of area 4 and analyze the LSA types associated with that area. In these examples, the LSA's not related with area 4 and the type 1 and 2 LSAs will be omitted because they are distributed within any area type.

Normal areas do not change the propagation of the LSAs and the processing logic described above (Figure 7a). This area type is used by default. The backbone area is a special case of the Normal area.

Figure 7a - LSA distribution in the Normal area

The Stub area is characterized by the following features (Figure 7b):

Stub areas are used in LAN segments that have no connection with the external networks, but the routers in this area must receive full routing information from the neighboring areas. Using Stub areas allows to obtain a small increase in performance by reducing the LSA number and to protect the network from attacks from the external network segment.

Figure 7b - LSA distribution in the Stub area

The Totally Stub area behaves similarly to the Stub area with one exception: LSA's of types 3 and 5 from the neighboring areas are replaced with one LSA type 3 with a default route (Figure 7c).

The NSSA area has characteristics similar to the Stub area with one exception: the NSSA can have an external link (Figure 7d). Since LSA type 5 which is used to distribute routing information about the external links, is prohibited in Stub areas, NSSA areas use LSA type 7 for this purpose. This LSA type has the same structure as LSA type 5, but it is permitted in NSSA areas. At the area border, the ABR converts the LSA type 7 to LSA type 5, setting itself as the routing source. Since the ABR performing the LSA conversion becomes the source, there is no need to generate an additional type 4 LSA.

Usually, the NSSA area usage is a result of the network's development: connecting an external communication channel to the Stub area requires changing its type to NSSA.

Totally NSSA areas are a result of the network development: connecting an external link to a Totally Stub area requires changing the type of the area to Totally NSSA.

One of the OSPF principles is to always connect two non-backbone areas only through the backbone area. Despite that, as a result of the historical development, the structure of some networks does not match with this principle. Bringing such networks up to the OSPF backbone can be costly, so OSPF has been extended with the virtual link concept.

The virtual link has the following features (Figure 8):

The OSPF protocol features can be summarized as follows:

The examples on how to configure OSPF are present in the child page: OSPF protocol's configuration.