Performance of the Infinet Wireless devices

This document is intended to demonstrate Infinet Wireless devices potential performance. The data used in the document is obtained through laboratory testing. The parameters of communication channels in real conditions may differ from the presented, however, under conditions of minimal external influence, the obtained values are achievable in practice.

The link quality parameters depend on two factors: external conditions and wireless devices configuration. An environmental factors are a set of characteristics related to the formation, distribution and reception of a radio signal, the mounting quality, etc. The complex influence of these factors is unique and depends on the specific case, therefore the task of reproducing the possible situations diversity is time-consuming. The modulation code scheme decreasing is a consequence of signal-to-noise ratio (SNR) decreasing. Therefore, the possible influence of external factors during laboratory testing was taken into account in the initial data. The wireless networking fundamentals are detaily described in the corresponding online course available on the IW Academy portal.

The parameter configuration influence will be described within this document. The article contains several Infinet Wireless hardware platforms, characteristic set of parameters that affect the performance will be specified for each.

Let's look at the example, we will transmitt 6 bit of information - "100111". In the first case, for the information sequence transmission, we will use the QPSK 3/4 modulation code scheme, in the second case - QAM16 1/2. The parity check code is used as the error-control code.

At the Figure 1 signal constellations for modulation code schemes QPSK 3/4 and QAM16 1/2 are shown. Each point corresponds to a certain amplitude value (A) and phase (p) of the signal, and a set of bits is assigned to each of these signals. By forming a signal with given amplitude and phase values, the corresponding data set is transmitted, and the set of all signals (constellation points) is called allowed states. The greater the number of allowed states, the more bits can be transmitted by a signal element with given amplitude and phase characteristics.

When using QPSK 3/4 modulation, each three bits information sequence will be complemented by one bit of parity check, those instead of the original six bits sequence, eight bits will be transmitted - "10011111". The allowed signal states number for QPSK modulation is four (22), therefore, one signal per unit of time (signal element) can transmit two bits of an error-control sequence. Thus, to transmit eight bits of the received sequence, four signal elements (8/2 = 4 signal elements) are required.

For QAM16 1/2 modulation, each information bit is complemented by one parity check bit — the original six-bit sequence is converted to a 12-bit sequence "110000111111". The allowed signal states number for QAM16 1/2 modulation is sixteen (24), therefore, one signal per unit of time (signal element) can transmit four bits of an error-control sequence. Thus, to transmit twelve bits of the received sequence, three signal elements (12/4=3 signal elements) are required.

Table of the correspondence between modulation code scheme and bitrate in InfiLINK 2x2, InfiMAN 2x2 devices

Table of the correspondence between modulation code scheme and bitrate in InfiLINK Evolution, InfiMAN Evolution

Table of the correspondence between MCS index and modulation type in Quanta 5, Quanta 6 families devices 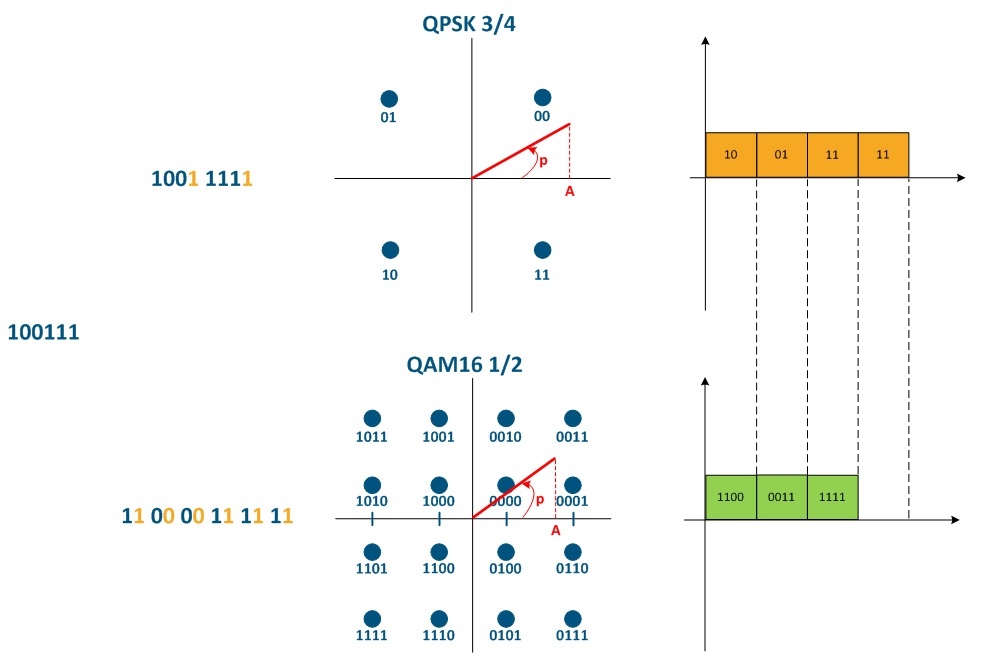 In practice, at the same time, multiple frames of different length are transmitted in the network, so it is useful to evaluate the link quality parameters by generating traffic consisting of frames with a given size. Testing is performed for frames with sizes from 64 to 1518 bytes, which is regulated by the Ethernet protocol.

To explain the frame size effect on the useful throughput of the communication channel, let's look at the Ethernet frame structure (see Figure 2a). An Ethernet frame consists of two service fields with constant length: a header (14 bytes) and a checksum field (4 bytes), and a data field (46-1500 bytes), i.e. total frame size is in the range of 64-1518 bytes.

Let's look at the task in which we need to transfer 1500 bytes of information by placing the data in Ethernet frames. In order to do this we will use frames of different lengths: 1518 bytes (Figure 2b), 518 bytes (Figure 2c), 268 bytes (Figure 2d). Summary information about the service headers size and its share in the data stream is given in the table below. We can see that with decreasing frame size, the cost of transmitting service headers significantly increases, while the share of payload data decreases.

With decreasing frame size, the share of overhead costs for service headers (regulated by the requirements of the data transfer protocol, as shown in the table above) increases. The solution for improving the efficiency of data transfer by using maximum length frames seems obvious. However, small frames are processed faster by network equipment, it reduces the time to propagate a frame from source to destination. Distribution time is critical parameter for some types of traffic. For real-time traffic, such as voice traffic, a reduction in frame size is forced, because the key indicator of the link quality in this case is not the throughput, but the delay value. Therefore, the data should be sent as quickly as possible, in smaller portions.

In general, the delay value depends on:

When a radio channel is established between two devices, F1 carrier frequency is selected for them, the spectrum of which is shown in Figure 3a. Such a signal does not carry information, since its main parameters (amplitude, frequency, phase) are known and unchanged, i.e. it's possible to predict the state of the signal in any future time period. In order for the radio signal to become an information carrier, its parameters are changed in accordance with the data flow. This process is called modulation. In the modulation process, the basic parameters of the signal are changed and its spectrum is transformed - now the signal occupies a certain frequency band ΔF (see Figure 3b).

Note that the frequency channel width affects the available set of modulation code schemes and the link performance. Thus, the radio link capacity increasement can be accessed by expanding the occupied bandwidth.

To explain the radio frame period effect on the link quality parameters, let's look at the connection of two devices (InfiLINK XG/InfiLINK XG 1000 or R5000 with TDMA firmware). The transmitting information mechanism in the radio medium is presented below (see Figure 4). For detailed description of the data transfer mechanisms for TDMA and Polling see TDMA and Polling: Application features. A radio frame is a time period within which a subscriber terminal is serviced by a sector. During one radio frame, data is exchanged between two devices in the downstream and upstream.

Similar to Ethernet frames, a part of the radio frame is allocated for service traffic. In particular, the synchronization field and guard interval are obligatory and do not depend on radio frame period The remaining time useful data is transmitted. Thus, same as the Ethernet frames, a longer radio frame length will lead to more efficient utilization of the communication channel, but the delay value will increase (the next data packet can be transmitted only in the next transmission interval, and the longer the radio frame is, the longer the waiting time).

Figure 4 - The transmitting data mechanism for TDMA and TDD

The "Maximum distance" parameter affects the guard interval value (see Figure 4), and also the efficiency of using the link  throughput. In addition, the actual farness of the subscriber terminal affects the radio signal propagation time in the media.

The transmission waiting time is proportional to the number of subscriber devices, since a time interval equal to the frame period is allocated for data exchange with each station. Thus, the delay value depends on the number of active subscribers.

The VBR option (variable bitrate) can be configured on the slave device and allows to increase efficiency of the service data transmission. With the VBR option disabled, the Sync message service fields are transmitted using a minimum modulation code scheme. When VBR is enabled, Sync fields will be transmitted on the modulation code scheme higher then the minimal, if possible. This allows to transmit the sync sequence faster, reduces the share of service messages in the total transmission time and increases the link performance