While working in PtMP topology wireless network could face a problem when one of the subscriber devices has much poorer connection characteristics to Base Station than the other ones. Such subscriber device is using a considerable part of Base Station’s resources. While Base Station is trying to send him a packet on a low bitrate other subscribers are waiting for this transaction to finish. Therefore, all the networks’ performance will be reduced.

TDMA-based networks are less-subjected to this issue. However, those “bad” subscribers get even lower throughput compared to that in the polling-based networks.

It is recommended to place BS sectors above the subscriber terminals as high as possible to provide proper antenna tilt in vertical direction and to minimize self-interference. The optimal antenna tilt is defined by the vertical beam width of the sectoral antenna and by the required sector coverage. It must cover all the area, where you plan to deploy the subscriber terminals.

So, using the synchronization, four-sector BS can operate using only two frequency channels, that significantly increases real spectral efficiency of the system.

The recommended frequency plan for a four-sector BS: ABAB 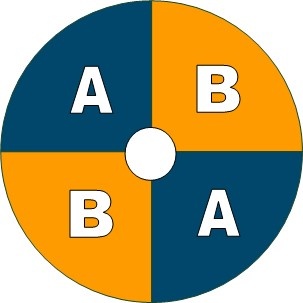 Frequency planning can be performed according to one of the following schemes:

1) TDMA firmware with the synchronization unit

Figure - TDMA with the synchronization unit

2) MINT firmware and TDMA without the synchronization unit

Figure - MINT and TDMA without the synchronization unit

Connection to the third-party equipment