The following abbreviations are used in this document:

Purpose of this document

InfiNet Wireless is one of the leading manufacturers of Broadband Wireless Access equipment for carrier grade fixed installations. InfiNet Wireless uses its own proprietary transport protocol, MINT, which interconnects the units by wireless and wired (MINT-over-Ethernet technology provides MINT connectivity over wired Ethernet) links. Within MINT areas, it is possible to send any command for execution via the MINT protocol, to a specified unit (MAC addresses can be used for specific unit selection or broadcast MAC addresses can also be used).

This document shows how the unit management can be organized using the MINT protocol for the InfiLINK 2x2 and InfiMAN 2x2 families devices. The MINT protocol operates on both Layer 2 and Layer 3. However, in case of incorrect or missing IP settings on the units, the management of the InfiNet Wireless unit can be restored by issuing MINT RCMD (remote commands) from another InfiNet Wireless unit. MINT management only requires L2 communication and MINT connectivity between units.

Introduction to the MINT protocol

The MINT main purpose is to provide path selection with best quality for wireless (and wired) traffic at Layer 2 (switched traffic).

MINT related to the OSI model

A MINT link is the link between two units that use MINT as transport protocol.

MINT encapsulates and transports all types of traffic and all protocols. Thus, MINT is the only transport protocol for the InfiNet Wireless InfiLINK 2x2 and InfiMAN 2x2 families.

MINT operates between the DataLink and the Network layers of the OSI Model. Therefore MINT is capable to encapsulate and carry through the link Layer 2 traffic (Ethernet switched data) and Layer 3 traffic (IP routed data). 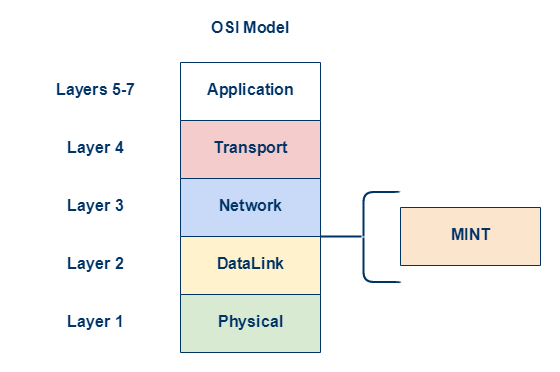 MINT and the physical interfaces

The MINT cost is calculated using the following parameters:

STP BPDU transmission can be blocked by configuration through any logical interfaces.

The MINT protocol will quickly adjust to possible changes in critical parameters – re-calculates the MINT cost for each path and rebuilds the path accordingly. Moreover, due to the built-in capability to quickly adopt changes, even the data flow within the MINT network can change rapidly as well.

In the picture below a mesh topology is shown. All units run the MINT protocol for each interface, hence each connection is handled by the MINT protocol. In this case, node J has to send data to node F. 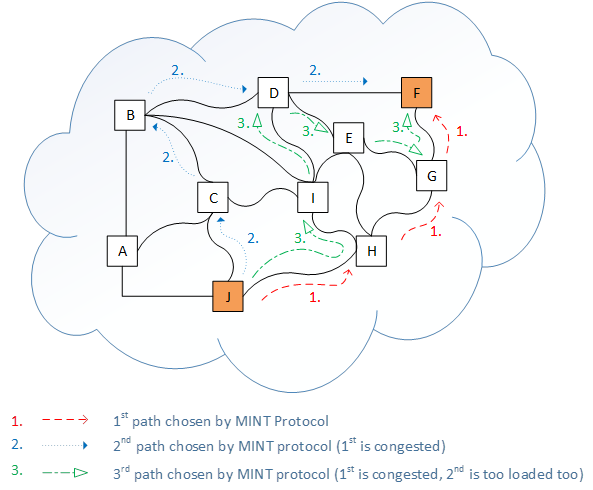 The path selection process is shown in detail in the video below:

All the benefits of the MINT protocol mentioned above, are available only in a network where all the units support the MINT protocol as the only transport protocol. Such a MINT network is called a MINT area. Thus it is required to create a unified MINT area consisting of InfiNet Wireless units interconnected by wireless radio interfaces (RF) or by wired MINT-over-Ethernet (Pseudo Radio) interfaces.

So, here we have a network where almost each unit has at least two connections via the MINT protocol. Therefore, it is possible to switch the traffic via one or another path (or even load balance using both paths). In case of a link failure, the traffic will flow through the remaining link. Eventually, under normal circumstances the units will always stay connected because both links being down is a situation very unlikely to happen. It doesn’t really matter what type of physical connection is used (wired or wireless), MINT works with any connection, the only difference is the MINT cost value for each link. So the MINT area main purpose is to create a the network where all nodes are familiar with the link cost values between all nodes and to guarantee the fastest calculation of the best route by taking into account the radio parameters.

So, a MINT neighbor is designated by its MAC address.

A unique feature of the MINT protocol is the possibility to send any command for execution to any MINT neighbor from a MINT neighbor unit. It is called MINT Remote Command execution (RCMD). MINT RCMD could be helpful in lots of cases, such as: lost password, ip address settings cleared, no possibility to login to the remote MINT neighbor directly, or when it is required to execute some commands on all MINT neighbors.

The full syntax of the MINT remote commands with different options is described in the WANFleX command reference guide - Layer 2 commands set -PHY and MAC.

In the default configuration, the MINT protocol is enabled and used only between wireless radio interfaces. However, in order to create an interconnected MINT area, MINT-over-Ethernet interfaces (PRF) are required.

In order to enable MINT-over-Ethernet, proceed with the following:

In case that two InfiNet Wireless devices are placed within certain VLANs, then the configuration of PRF should be performed within a specific VLAN tag .

MINT-over-Ethernet generates broadcast traffic to find other MINT neighbors. Sometimes, such broadcast traffic could be treated as abnormal by the network, especially for enterprise networks using a comprehensive network security policy.

It is recommended to put MINT-over-Ethernet connections into dedicated VLAN zones, thus keeping all broadcast traffic within a unique VLAN

The steps to configure MINT-over-Ethernet are shown below. Only step 4 is different for the untagged approach (4b) versus the vlan based approach (4a).

1. Create Pseudo Radio (PRF) interface on all devices and set eth0 as parent:

2. Start the MINT protocol for the PRF interface:

Check the connection between the devices:

Therefore, the next step is to join these instances together.

Now, both MINT interfaces are treated by the unit as a single entity, hence MINT exchanges information using both ways (wireless and wired).

4. In order to allow the IP management traffic to reach the unit, switch groups need to be configured.

4b. If no VLAN is used for management, it is enough to add the eth0 interface and one of the joined interfaces (rf or prf) to the switch group.

6. Don't forget to save the configuration.