The throughput test can be performed with the "Performance Tests" tool built into the web interface, in the section "Device status" → "Link statistics for the rf6.0 interface". This tool generates test traffic between the devices and it allows to obtain data about the real link throughput both in one direction and in a two-way manner. The throughput evaluation is performed using traffic with the specified priority without taking into account the service traffic required to maintain the link operational. To exclude the influence of the data traffic on the test's result, it is recommended to set the highest priority for the test traffic (at least 15). Performance tests are always performed on the highest modulation,the detailed description of the parameters and the performance test settings are available in the "Device Status menu" article. 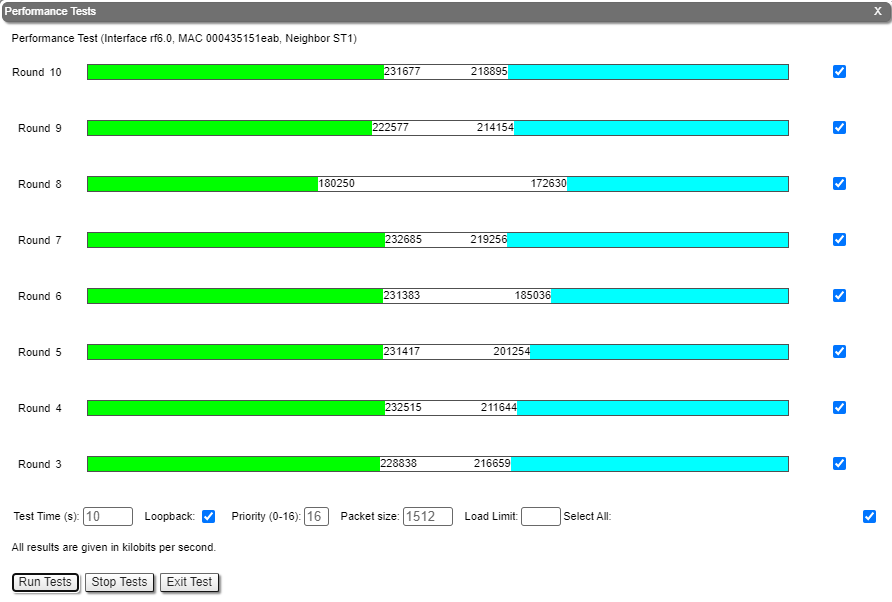 When using the command line interface to manage the device, it is possible to test the radio link via the "ltest" command.

Link statistics on the rf6.0 interface

To evaluate the quality of the wireless connection with the neighboring device, use the color indication in the "Status" column of the "Link statistics on rf5.0" subsection:

Make sure that the "TX Power" and "Bitrate" parameters match with the values of the planning phase. In the "Link statistics on rf6.0" of the "Device status" section, pay attention to the wireless connection parameters. The main parameters are the retries number and the bitrate. It is not recommended to use the link with a retries number exceeding 5%. The actual bitrate (modulation level) depends on the SNR parameter - the signal-to-noise ratio. The highest modulations are available at SNR values of 27-50 dB.

For detailed description of the link parameters proceed to the "Device Status menu" article.

To display information about the wireless link status via the command line interface, use the "mint rf6.0 map detail" command. 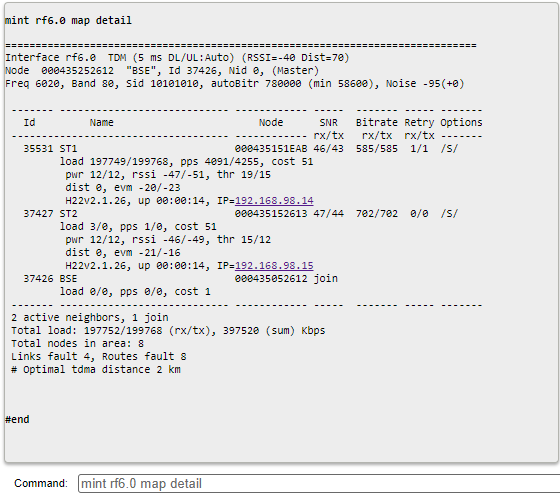 Pay attention to the indicators in the "Options" column. The following values are possible:

A question mark in front of the remote's device name indicates that it has no password.

Pay attention to the "*" symbol, which can represent the following:

To display statistics via the command line interface, use the ""rfconfig stat" command. 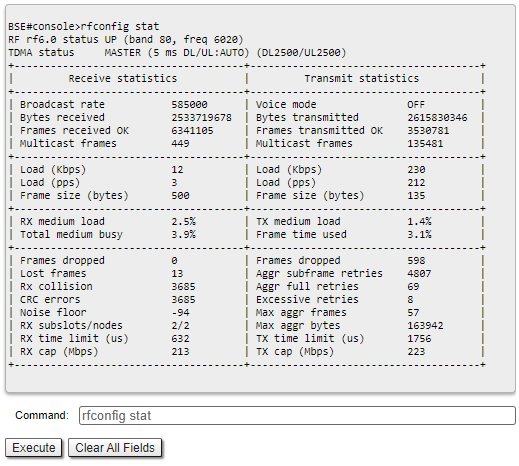 Pay attention to the following indicators:

The "QoS statistics" section provides information about the transmitted and dropped packets in each priority queue configured on the device. Drops present in the traffic processing queues indicate that the throughput threshold has been exceeded. Losses in queue q00 (P16) are acceptable because this queue contains performance test data.

To display statistic via the command line interface, use the "rfconfig rf6.0 stat qos" command. The number of dropped packets for each configured queue can be displayed by the "qm stat" command.

If the link has deteriorated during its operation, having the initial parameters corresponding to the calculated ones, it is necessary to find out when the problem has occured. Use the "Statistics graphs" tool to determine when or how often the problem occurs by changing the display options. 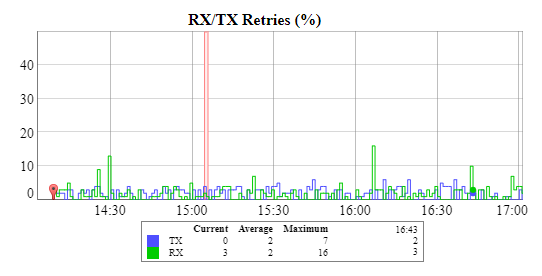 Pay attention to the CPU and memory usage indicators in the "Device status" section. Excessive processes running on a device can overflow the volatile memory and overload the CPU (over 95% usage), leading to a deterioration in the wireless link's quality. The CPU load can be displayed using the "system cpu" command and information about the device's memory state can be shown using the "mem" command.

Disruptions in the wireless link may be caused by the reboot of the device. In the "Maintenance" section or in the "system uptime" command output pay attention to the last device reboot reason. The following values are possible:

Proceed to the System Log tool in the "Device status" section or by using the "system log" command. Using the log entries, check if the link degradation was caused by a configuration change ("system reconfiguration" message). Restore the previous version of the configuration if necessary. Detailed information about saving and uploading the configuration is available in the "General Purpose Command Set" article.

Pay attention to the following messages:

The link degradation can be caused by antenna misalignment or by the appearance of obstacles along the signal's propagation path. Use the built-in "Antenna Alignment Tool". The recommended parameters are shown in the table below. If the parameters differ significantly from the calculated ones, check the alignment accuracy on both link sides.

If the value of the RSSI parameter remains high while the CINR value decreases, it may indicate high interference levels near one of the devices. The deterioration of both the RSSI and the CINR parameters can indicate a  misalignment of the devices. A detailed description of the "Antenna Alignment" tool is available in the "Device status menu" article.

When using the command line to manage the device, fine antenna alignment can be performed using the "ltest rf6.0 MAC ADDRESS -align" command. The command output will show the average CINR for the local and the remote devices. 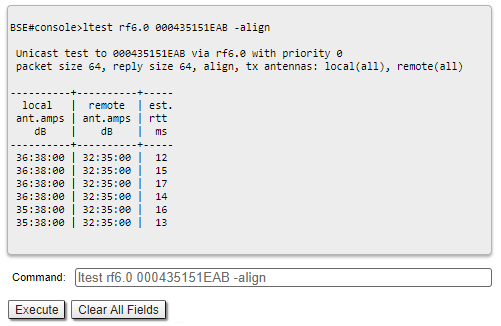