RIP (Routing Information Protocol) is a dynamic routing protocol based on the Bellman-Ford algorithm. The protocol has the following features:

Let's look at an example on how is the routing information distributed over a network using RIP. The example follows the scheme in (Figure 1):

RIP must be configured on all the routers. WAN-1 is the external network, i.e. the route to this network must be added to the RIP domain as external. 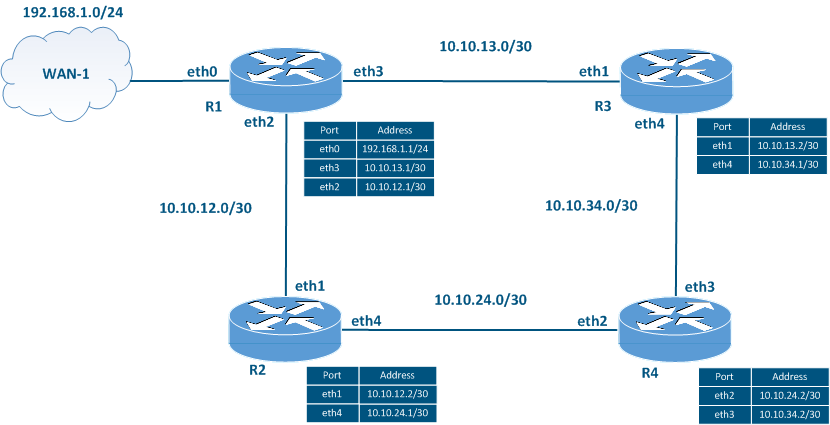 In this example, only the distribution of the routing information from router R1 will be described, because the routes from the other devices will be distributed in the same way.

The RIP operational algorithm is the following:

At this stage, RIP must be enabled on the routers and the list of interfaces that will participate in the RIP process must be defined.

The network list definition is performed using the "network A.B.C.D/M" command. All network interfaces whose IP addresses belong to the specified range participate in RIP. This means that the routing information will be distributed from these interfaces, and the information about the networks associated with these interfaces will be transmitted to other routers.

If an interface participates in the RIP process, but routing information should not be distributed over that interface, then the interface can be configured as passive.

The routing information distribution about the networks connected to router R1 is performed in the following sequence: 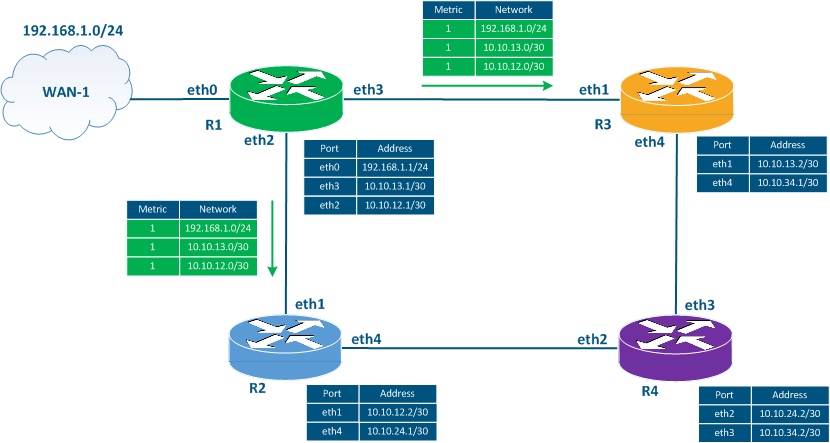 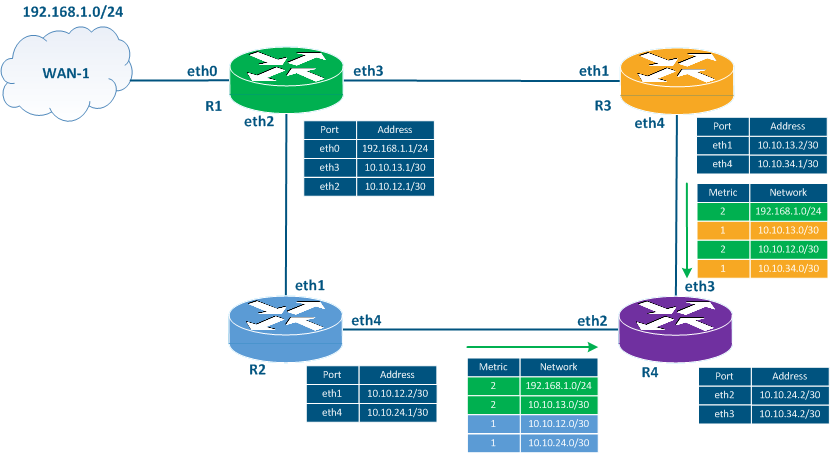 Adding routes to the RIB

After exchanging the service messages, the routers add the received routes to the RIB. In this case, some routes are filtered out. To filter the routing information, the devices are guided by the following principles:

Let's assume that router R4 received a service message from router R2 earlier than from R3. Then, according to the described principles, the routers add the following routing information to the RIB:

Adding routes to the FIB

Note that the routers do not establish neighboring relations and do not synchronize the routing information exchange time, therefore, the time for sending service messages is distributed in the 30 seconds interval for every router, avoiding this way the service traffic bursts in the network.

After a route that was learned via RIP is placed in the RIB, the timeout timer is started, its default value being 180 seconds. If the router does not receive an update within 180 seconds, the route will be marked as unavailable, i.e. the metric value of such a route is set to 16. The router cannot use this route for data transmission.

The RIP service data exchange is not guaranteed, so the timeout timer value must be greater than the update timer. Otherwise, in case of delays or packet loss a route can be falsely marked as unavailable.

After adding a route to the RIB, in addition to the timeout timer, the garbage timer is also started with the default value of 240 seconds. If the router does not receive an update within 240 seconds, then such a route will be removed from the routing table.

When routing information updates are received, the timeout timer and the garbage timer are reset to their original values.

RIP is a dynamic routing protocol and must adapt to the changes in the network. There are three main scenarios that describe the network changes: 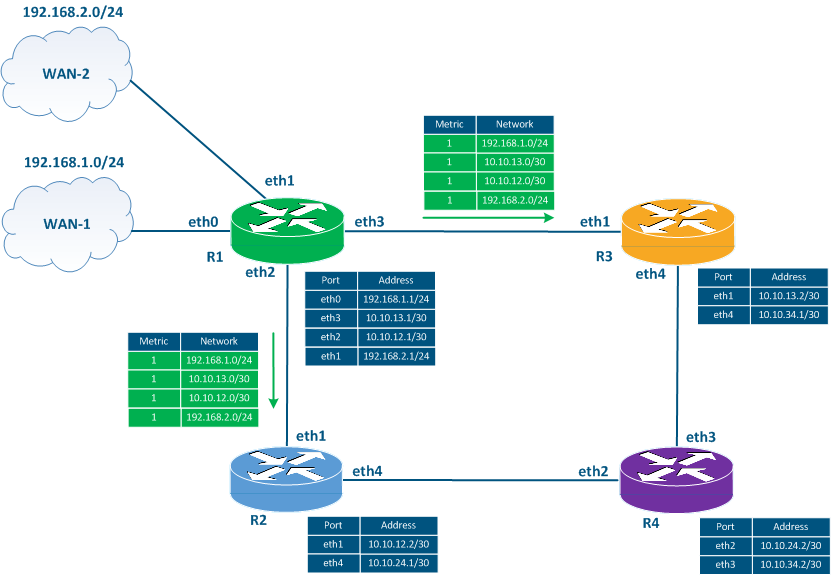 A link is out of order

Let's assume that the link between routers R1 and R3 has failed (Figure 3b): 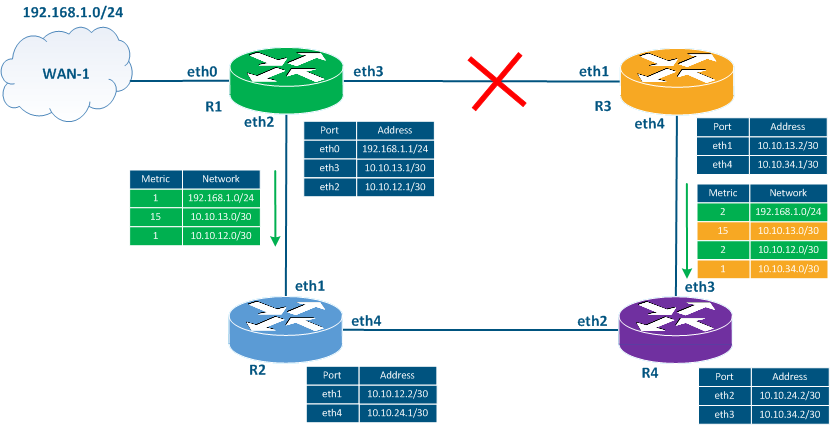 The time during which the updated information is distributed depends on the size of the network and on the update timer's value. As the maximum network size is 16 hops and the update timer by default is 30 seconds, then in the worst scenario, the information about the link's unavailability will be transmitted in 15 * 30 = 450 seconds.

A router is out of order

Let's add two switches SW1 and SW2 to the scheme in (Figure 3c) and assume that router R1 has failed.

If router R1 fails, it does not have time to send the routing information update about its status to routers R2 and R3. In addition, R2 and R3 won't be informed that R1 is unavailable because they are directly connected to switches SW1 and SW2 which don't support RIP. In this case, the other routers will assume that R1 is available during the timeout timer and will use the routes associated with R1. Particularly, the routes to networks 10.10.12.0/30, 10.10.13.0/30 and 192.168.1.0/24 will be valid in the routing tables of all the routers. 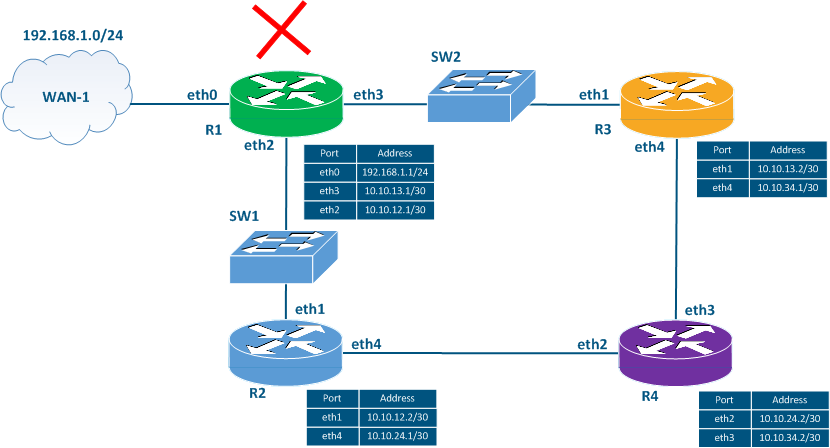 Let's simplify the scheme, leaving two routers R1 and R3 (Figure 4a). We will assume that the routers have exchanged routing information and the device's routing tables are up to date.

Figure 4a - Network scheme for the false route scenario

The link between router R1 and the external WAN-1 network fails (Figure 4b). Router R1 sets the metric equal to 16 for such a route, but does not generate a service message with updated routing information, since the update timer value is 25 seconds. At the same time, the update timer on router R3 is 3 seconds.

A routing loop is formed, each router, passing traffic to the 192.168.1.0/24 network. Thus, the traffic will be transmitted between the routers until the TTL expires. In addition to the routing loop generation, both routes are false as the connection with the network 192.168.1.0/24 is lost.

Figure 4c - Distribution of the service messages by R3

The false route exchange will continue until the metric value reaches the invalid value of 16. With the default settings, this will happen 36 minutes later after the occurrence of the link failure between R1 and WAN-1.

To avoid the appearance of the false routes, the following mechanisms are used:

The listed mechanisms make it possible to adapt RIP for the modern networks, since the existence of the false routes for 36 minutes or a protocol convergence time of 450 seconds is unacceptable for many services.

RIP has the following features: